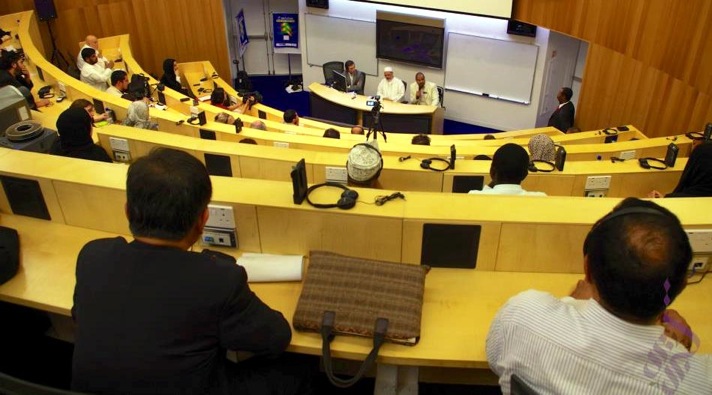 The event was moderated by Dr Jasser Auda, Deputy Director of CILE.

Mr Boyko Atanasov highlighted the living conditions of migrant workers, from signing job contracts in their home countries to settling and submitting to their employers’ rules. Dr Ahmed Raissouni focused on the principle of human dignity and its critical importance in Islam. He criticized the mistreating of migrant workers and the violation of their rights, and he referred to the Prophet’s teachings which required gentle and kind treatment of workers and employees. Dr Musab Al-Khair called for the implementation of Islamic Ethics with workers especially honesty, truthfulness, and fulfilling promises.

The seminar was attended by faculty members and students of Hamad Bin Khalifa University, in addition to a number of media and law specialists. The attendees discussed the ways in which the living conditions of migrant workers could be improved through the collaboration of civil society and governmental to ensure the implementation of laws and the issuance of new ones, in order to protect workers from the abuse by their employers.

This event was part of a series of public seminars and lectures organized by CILE, bringing together Islamic scholars and specialists in forums that tackle the critical issues of the day in various fields and professions, such as, methodology, bioethics, environment, politics, food, psychology, economics, education, media, arts and gender issues.

Invitation to Public Lecture on Necessary Migrant Labor Reform
The Research Center for Islamic Legislation and Ethics (CILE), a member of the Qatar Faculty of Islamic Studies in Hamad Bin Khalifa University, is pleased to invite you to its first public lecture