Open for Local and International Applicants

The breathtaking advancements brought forth by the modern biomedical revolution are manifold. One of its great achievements, which was facilitated by the molecular revolution of the 1940s and 1950s, was the ability to identify the previously invisible and inaccessible microscopic and molecular parts of the human body. The broad discipline of genetics, and related fields like genomics, paved the way for embracing the idea that the “gene” has been the central organizing theme of modern biology and that our genes play an extended role in our life in general, which eventually added to the gene’s public prominence. Besides “knowing” the genetic structure of the human body, man also started exploring the possibility of “modifying” or “engineering” this structure, with the help of advanced technologies like CRISPR-Cas9 and Prime Editing. All of these technological developments triggered deep ethical questions, some of which were unprecedented, that were addressed under the broad scope of “GenEthics”. This new context in human history was reflected upon and examined in a long list of works written by authors from extremely diverse backgrounds and specializations with some of these works carrying striking titles like God Gene, Suicide Gene Therapy and What Genes Cannot Do.

The Research Center for Islamic Legislation & Ethics (CILE) has contributed to the ethical deliberations with relevance to fields like genetics and genomics in various ways. CILE faculty led a number of funded research projects, two of which were funded by the Qatar National Research Fund (QNRF). The first project is entitled “Indigenizing Genomics in the Gulf Region (IGGR): The Missing Islamic Bioethical Discourse”, no. NPRP8-1620-6-057 and it was accomplished in 2020. The second project, also led by CILE professor of Islam and Biomedical Ethics, Dr. Mohammed Ghaly, is entitled “Genomics, Islamic Ethics and Public Engagement (GIEPE): Towards Bridging the Knowledge and Communication Gaps”, no. PPM2-0216-170014. This project is still ongoing and this Winter School makes part of its overall strategy, which aims at improving the knowledge of (graduate) students about GenEthics.

As for the outcome of these projects, CILE organized an international seminar whose proceedings was published in an edited volume entitled Islamic Ethics and the Genome Question. This is in addition to various journal articles and thematic issues published in both English and Arabic, whose full-text can be accessed here. Finally, CILE has also organized various public events, which presented the main results of CILE research in the field and can be found on the CILE website.

This School is a continuation of CILE efforts to critically examine the ethical issues triggered by cutting-edge advancements in genetics and genomics. As per CILE standard practice, GenEthics will be approached in this school from an interdisciplinary perspective. Thus, the scholarly field of genetics will be introduced in a way accessible to the general public. Attention will also be paid to the international deliberations on GenEthics and parallel discussions and experiences in the Muslim world on various aspects, like genetic counseling. A great deal of the School will be dedicated to examining the relevant Islamic ethical perspectives, where the speakers will explore how scholarly disciplines rooted in the Islamic tradition (e.g., theology, philosophy, and Islamic Law) can contribute to the discourse on GenEthics. For instance, the presentations throughout the School will address issues like the interplay of predictive genetics and the metaphysical concept of ghayb (the unseen) in the Islamic tradition, how DNA paternity testing would fit within the Islamic juristic discussions on paternity and lineage (nasab), etc.

Like previous CILE events, where CILE partnered with reputable national and international institutions, this edition of the CILE Winter School will be organized in collaboration with the College of Health Sciences at Qatar University and the Centre of Genomics and Policy (CGP) at McGill University.

In order to adequately cover the various aspects and dimensions of GenEthics, the speakers in this Winter School will come from different specializations, and have different research interests, including Bioethics, Genetics, Healthcare Policy, Islamic Ethics, Sharia and Islamic Studies. The current provisional list of speakers will include the following:

Please submit the following documents no later than January 10, 2022.

Interested applicants can send the two documents to winterschool@cilecenter.org.

If you have any questions about the Winter School, please contact:

Accepted applicants will be provided with a list of reading assignments. Each successful applicant is expected to prepare well for the Winter School, by going through these readings in advance and engaging in interactive discussions throughout the School program. 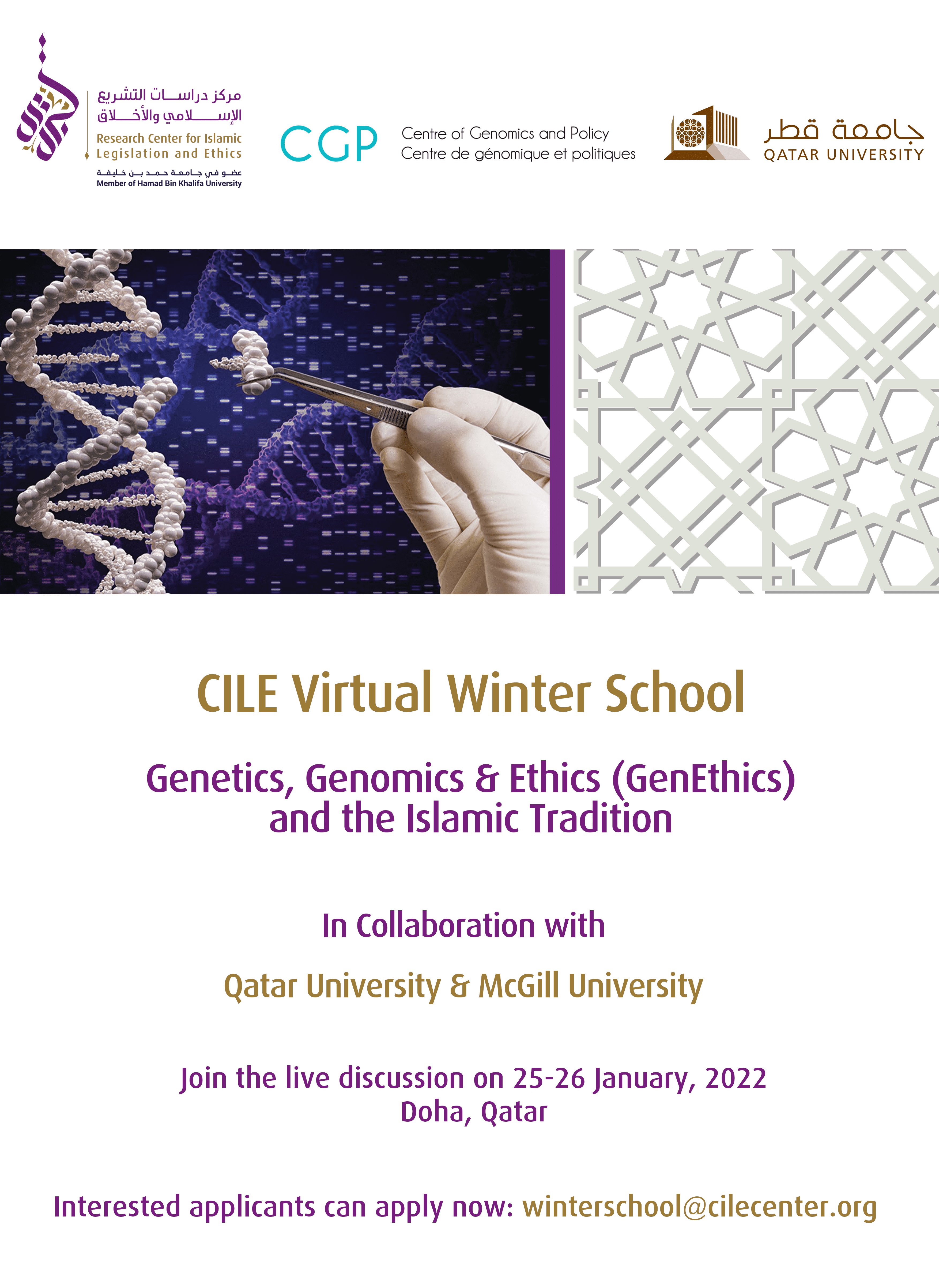