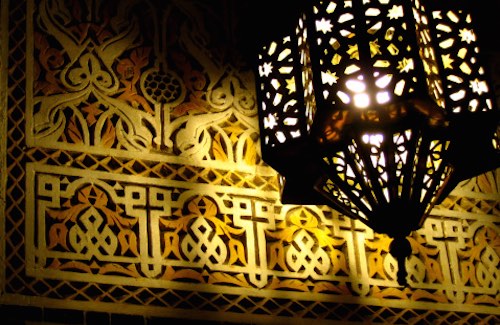 What is the relationship between Islamists and artists in Morocco? Away from confusing generalization; for years it has been more like a truce which abruptly ends whenever an artwork emerges in the scene to disturb those who believe in fine art such as advertising Miss Morocco or the appearance of a pornographic scene in a film or a play; recurrent crises reviving the controversy over the concept of “Purposeful Art” and its role in “Virtue Promotion” and “Expressing the values of society and nation’s issues” against “Freedom of Artistic Expression”, art’s role in “demolition of society’s taboos”, “Releasing Creativity” and “artistic necessity which requires shooting some bold scenes”. I would argue that the relationship between religion and art in terms of principle and aims does not actually resemble the nature of relationship in reality. This is because the relationship between religion and art is not that of traffic cop – violators relationship. Again, the relationship between art and religion is not the same as that of a disobedient son with family. Before analyzing the facts of relationship, I would like to explain at the outset that I do not necessarily limit art to the isolated museum products adorning palaces and protected from use. The concept of art may expand to include all products in life featuring workmanship, decoration and sophistication without differentiating between museum arts and craft arts. The role of an artist shall not be limited to the creation and photography but the life role of art. The daily creation of arts is required from everyone in each respective field as Almighty Allah said, “And be thou kind even as Allah hath been kind to thee”1 and Prophet Mohammed once said, “Allah loves, when one of you is doing something, that he/she does it in the most excellent manner” and beauty is of Allah’s qualities, “Allah is beautiful and Loves beauty”. Accordingly, creativity is the genuine aim of art and most people might not have a talent in sculpture, poetry or painting, but they experienced that sense of creativity and spiritual sublimity in a way or another. The modern Muslim thinker Alija Izetbegovic2 is of the opinion that both religion and art share the same issue of humanitarian inspiration expressed in different ways. For instance religion emphasizes immortality and infinity while ethics emphasizes good and freedom and art emphasizes man and creation. These are all different aspects of the same core of reality expressed through a language which may be limited in delivering the meaning but it is the only available language. Furthermore, both religion and art share the same initial unity of their roots since drama for example has a religious origin whether in terms of subject or history because the temples were the first theaters with their actors, clothing and audience and the first dramatic plays were rituals practiced in the temples some four thousand years ago in ancient Egypt. Furthermore, architecture reached – in all cultures – its greatest inspirations in building temples. The same applies to temples in India and Cambodia and also to mosques in the Muslim world and to the temples discovered in the forests of America before the arrival of Columbus and to almost all 20th century churches all over Europe and America. For painting, sculpture and music, their connection to religion is more obvious. Most of the Renaissance great artworks were limited to tackling the religious subjects and such works had papal welcome in churches all over Europe. There was almost not a single Church in Italy or Netherlands which is not considered to be a museum at the same time. The greatest 20th century music composers, “Debussy” and “Stravinsky”, composed their music in religious topics. Debussy composed “Saint Sebastian the Martyr” and Stravinsky composed the symphony of Psalms & Liturgy. Furthermore, “Chagall” painted his fifteen paintings about religious topics. What art delivers to us and the method of delivering is something unbelievable as a religious message; an artistic painting is somehow a type of rituals painted on canvas as well as symphony is a melodic ritual. Art as well as religion, are a spiritual experience through which man looks for infinity and seeks good, freedom, sociability and peace; a genuine spiritual personal with unique experience requires dedication, honesty, soul glare and its beautiful sense of the meaning; core experiences holding man’s nobility, eagerness, wishes and man’s looking forward to purification of which ultimate content is pure humanity.